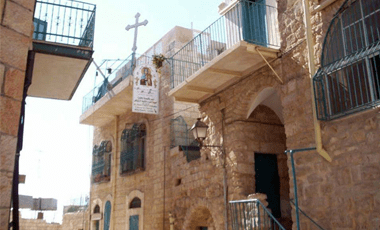 The trials relate to violence on April 30 last year in and around the St Mary’s Coptic Church and Convent in Bethlehem, the Biblical birthplace of Jesus Christ, explained advocacy group Middle East Concern (MEC). “One member of a family was illegally occupying convent property assaulted Sister Maria,” MEC told BosNewsLife.

“Another member of the family then attacked a vehicle driven by another nun, Sister Esther, as she was taking witnesses to the police station to make a statement,” MEC said in a statement.

The assailants were initially unaware of a police officer inside the car, Christians said. He made himself known and stopped the attack, but later in court “failed to give a true account of events,” MEC claimed. BosNewsLife could not reach the policeman for comment.

Sister Esther has been asked to provide the court with a psychologist report as she suffered trauma during the attack, according to Christians familiar with the case.

However, the female assailant of Sister Maria brought a complaint against her saying the nun had “assaulted her in the convent property,” according to rights activists.

On September 13 a hearing was scheduled in the case that the female assailant had opened against Sister Maria. But, “to Sister Maria’s chagrin, the plaintiff failed even to attend” the procedure, prompting the postponement of the hearing till November 12, MEC added.

The trial of Sister Maria was to begin September 19, but the judge “failed to turn up to the hearing and a new date will be scheduled,” the advocacy group said.

MEC suggested that it wasn’t surprised by the delays. “The family that was illegally occupying parts of the convent and responsible for the attacks has influential connections with the Palestinian Authority. It is believed that the justice process is being hindered as a consequence.”

Rights activists say there have “innumerable delays and postponements of hearings” in all three cases. The next hearing is scheduled for October 17 when Sister Esther will face her male assailants, BosNewsLife learned.

Christians in the West Bank are frustrated with the lack of progress and request prayer for hearings to “take place without further delay” and conclude with “fair and impartial judgments,” MEC said.

Local Christians reportedly also asked fellow believers to pray that judges and court officials will not show prejudices against the nuns and that the “family illegally occupying the church property will leave and find accommodation elsewhere.”

The case has underscored broader concerns about violence against the beleaguered Christian community in Palestinian Territories. In June this year, a priest in Bethlehem was stabbed while protecting his congregation from a violent crowd.

Priest Fadi Shalufa was knifed while trying to stop a group of men abusing Christians making a pilgrimage to what they believe was the birthplace of Jesus, the Basilica of the Nativity. Shalufa, who runs the adjacent Catholic Chapel of the Milk Grotto, was hurt after interfering in the commotion on June 1, video footage showed.

Anti-persecution charity Open Doors says Palestine now ranks 36th in its annual Persecution Watchlist, with the group warning Christians are “caught in the crossfire of the ongoing Palestinian-Israeli conflict.”

Open Doors said that “Their ethnicity means many restrictions from the Israeli side while their faith makes them a minority in the Muslim-majority Palestinian community.”

Adding to difficulties is that the Palestinian “society is conservative and leaving Islam is difficult,” the group said in a recent assessment.

Christians comprise up to 2.5 percent of the Westbank’s roughly 2.8 million people, according to estimates by the U.S. Central Intelligence Agency (CIA).