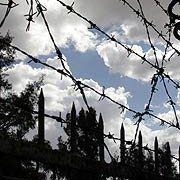 ASMARA/LONDON (BosNewsLife)– Investigators say dozens of devoted Christians have been detained near Eritrea’s capital Asmara as part of an official crackdown on Christian believers while in London Eritrean government supporters interrupted a vigil of rights activists and attacked a journalist.

Roughly 30 Christians were arrested May 17 as they gathered at two locations in Godaif, a region south of Asmara, rights investigators told BosNewsLife. “This follows reports of the arrest of 141 Christians, including 14 minors, in the Maitemenai district of Asmara, on or around May 10,” said rights group Christian Solidarity Worldwide (CSW).

The Christians were reportedly transported to separate detention centers according to their gender. About 50 of these detainees were released, but others remain behind bars, activists said.

The news emerged after a significant crowd of government protesters tried to interrupt a peaceful protest vigil Thursday, May 23, outside the Eritrean Embassy in London where advocates commemorated the closure of churches in Eritrea, BosNewsLife established.

The protest vigil has been held every May for 16 years by organizations such as CSW, the Eritrean Orthodox Church in Britain, and advocacy groups Church in Chains, Human Rights Concern Eritrea and Release Eritrea. 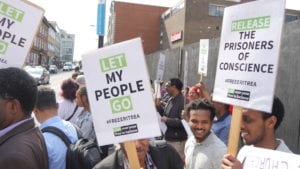 affiliated with the Catholic, Evangelical Lutheran and Orthodox Christian denominations or Sunni Islam in May 2002. Even within the established churches devoted Christians face difficulties as the officials regard them as a threat to the power base of autocratic President Isaias Afwerki and his allies, BosNewsLife learned.

Thousands of Christians have been detained and jailed over the years, some of whom held for well over a decade, according to activists and local believers. Eritrea is the home of the Eritrean Orthodox Church whose Christian history is defined by the Orthodox Church, experts say. “Therefore, other denominations—in particular, Pentecostal churches—are not regarded as legitimate. This exclusion leads to persecution on many fronts for non-traditional believers,” said Open Doors, a well-informed advocacy group.

At Thursday’s rally in London activists also recalled the “ensuing and ongoing campaign of arrests” of thousands of Christians in the autocratically ruled African nation. At its peak, the government crackdown saw at least “3000 Christians of all denominations detained arbitrarily,” CSW said.

Video footage obtained by BosNewsLife confirmed that counter-protesters had spread out across the area where the London vigil occurs typically. They reportedly notified local police of their “all-day event” on the previous evening.

Several men who approached the organizers told them to “leave this area because there are many more of us than you,” CSW witnesses said. Another allegedly asked: “where is Martin Plaut?” referring to a British journalist who was reportedly lured to a café near the British library and assaulted.

Plaut was reportedly attacked by a man who produced a large plastic box full of a white liquid and flung its contents at the journalist, screaming that he was a “traitor” to Eritrea. Plaut’s clothes and bag were soaked by the liquid, which appeared to have been a mixture of milk, flour, and eggs.

CSW’s Chief Executive Mervyn Thomas suggested to BosNewsLife that this was the first time the vigil was interrupted by government-linked people and supporters. “We have been protesting peacefully outside the Eritrean Embassy every year for the past 16 years,
and the fact that the Eritrean authorities organized a counter-protest this year means we are making an impact.”

However, he said, “We were not intimidated by any aggressive displays, and will continue our yearly vigil at that venue until every prisoner of conscience is free.”

The protest vigil eventually shifted to an area on the opposite side of the road close to the Embassy, and it continued as planned, despite loud music, singing, dancing, chants, and gesticulations from counter-protesters.

Speaking at the new location outside the Eritrean Embassy, Berhane Asmelash of Release Eritrea noted that every year, “thousands of Eritreans are perishing in the Mediterranean Sea, trying to flee from the government.”

He added: “In 2001, the government arrested journalists and some who asked for reform, and until now they are in prison, and in 2002 the Eritrean government shut all churches, and until now none of them have been opened, and a lot of officials are still in prison, hundreds of them. Even last week, some Christians were arrested. In Eritrea, it is bad for everybody.”

Other speakers included Priest Shenouda of the Eritrean Orthodox Church, and Elsa Chyrum of Human Rights Concern Eritrea, who said: “Nothing has changed in Eritrea since the rapprochement with Ethiopia” following years of conflict. He said Christians and others are “fleeing from imprisonment without trial, torture, persecution, and above all, the lifetime national service for every young man or woman over 18 years of age.”

CSW’s Thomas said that his group remains concerned “for those who were arrested recently merely for exercising their right to freedom of religion or belief.” He stressed that the crackdown violates the International Covenant on Civil and Political Rights, signed by Eritrea, and the country’s own “ratified constitution, which the government has failed to implement since May 1997.”

Thomas complained that these “grave violations” are continuing “even as Eritrea occupies a seat on the Human Rights Council (HRC)” of the United Nations. “We, therefore, urge member states [of the HRC] to facilitate the renewal of the special rapporteur’s mandate during the upcoming HRC session.”

The CSW leader stressed these measures are crucial to ensure “continued human rights monitoring” and to “assist in advancing accountability for atrocity crimes” in Eritrea as mentioned in a 2016 report of the HRC’s Commission of Inquiry. It is also important to set “time-bound benchmarks for improvements in human rights” in the country, he added.

The latest developments come amid pressure on President Afwerki to improve human rights in the nation that he has ruled since it became independent in 1993. His People’s Front for Democracy and Justice (PFDF) is the sole political party. Presidential elections planned for 1997 never happened in the country of nearly 5.6 million people, most of them Muslims.

The government has consistently denied wrongdoing and says people are free to worship within the laws of the land. In reality, Afwerki has overseen a “brutal regime” that rests on massive human rights violations, argued Open Doors, an influential Christian aid, and advocacy group. It placed Eritrea number 7 on its annual World Watch List what was it says are the 50 countries with the worst rights abuses of Christians.

Open Doors noted in its List for 2019 that government security forces conducted many house-to-house raids and imprisoned hundreds of Christians in inhumane conditions,
including small shipping containers in the scorching heat. “Protestants, in particular, face serious problems in accessing community resources, especially social services provided by the State.”

Additionally “Christians are being forced to join the armed forces, and Protestants, in particular, face serious problems with accessing community resources, especially social services provided by the state,” Open Doors said in an assessment. “Individuals from non-traditional church groups, such as evangelicals, face the harshest persecution forms of Christian persecution. Both converts from a Muslim background and cross-denominational converts from an Orthodox background encounter harsh mistreatment from their families and communities.”

In 2018, Eritrea embraced an end to hostility with both nearby Ethiopia and Somalia, but Open Doors said it remains to be seen whether this will have a positive impact on Christians. “This extreme pressure and state-sanctioned violence are forcing some Christians to flee Eritrea–often called “Africa’s North Korea”–and seek asylum.”