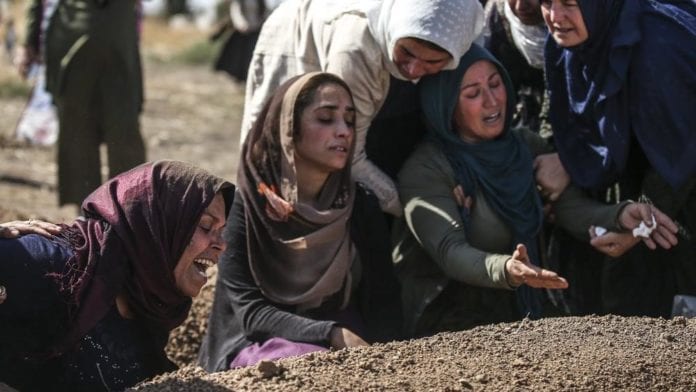 DAMASCUS/ANKARA (BosNewsLife)– Tens of thousands of panicked-stricken people, many of them Christians, are seen fleeing north-east Syria amid fears that a brief ceasefire will not end a deadly Turkish invasion. They escape a region where over 100 people, including some Christians, were reported killed in recent fighting between Turkish and Kurdish forces. Others were injured.

“Already one Christian home in a Christian neighborhood in the city of Qamishli has been shelled, with family members injured,” confirmed Christian aid group, Barnabas Fund.

“The mother is in a critical condition in hospital. Two other Christians in Qamishli have been killed and many wounded,” the group added.

Barnabas Fund said, “Christians are alarmed to note that the attacking forces include not only the Turkish army but also Syrian Islamist rebel factions whose extremist ideology makes them strongly anti-Christian.”

At least one Islamic rebel group, the Levant Front, seized Christian homes of those fleeing in the town of Tal Abyad, other Christian aid workers told BosNewsLife. It was not immediately clear how many houses had been taken over.

Barnabas Fund claimed that some of the Christian refugees were already displaced several times during Syria’s civil war. They “finally found stability in this region. Now they must run for their lives again,” the group explained in a statement to BosNewsLife.

As many as 100,000 people have already left their homes, according to the United Nations. The number of internally displaced persons could reach 300,000 in the area, warned Barnabas Fund citing local sources.

Turkey’s attacks, launched last week, target a part of Syria viewed as relatively secure in eight years of civil war. “But overnight it has become a battlefield,” Barnabas Fund complained.

The group noted that the region has strong Christian communities that are “often seen as a peace-keeping buffer between the Arabs and Kurds.”

Barnabas Fund said it is providing humanitarian aid such as food and shelter to Syrian Christians. Additionally, “We have also helped to support our brothers and sisters spiritually. That includes funding projects to strengthen church ministry and build them up in their faith through the years of unrelenting conflict, loss, and trauma,” it stressed. “As Christians, they suffered persecution for their faith in addition to all the normal suffering of the war.” 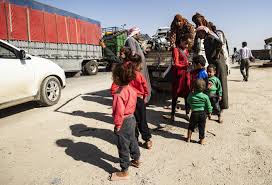 Christians have reasons to fear more violence. President Recep Tayyip Erdogan of Turkey warned his troops would “crush the heads” of Kurdish fighters if they don’t withdraw from a planned safe zone area in northern Syria.

Turkey agreed on Thursday, October 17, to suspend an offensive for five days to allow Kurdish forces to withdraw from the region.

But both sides have accused the other of violating the ceasefire, which was negotiated by the United States. American forces appeared unwilling Monday, October 21, to be drawn into the conflict. Reporters saw hundreds of trucks carrying American troops crossing into Iraq in a long military convoy Monday.

U.S. President Donald Trump said last week that he would bring all American troops stationed in Syria “back home.” He rejected concerns that this could lead to the freeing of Islamic militants from prisons and more pressure on minority Christians and other vulnerable groups.

American troops fought the Islamic State terror group alongside the Kurdish-led Syrian Democratic Forces. Most of these forces will move to western Iraq, U.S. Defense Secretary Mark Esper said. But he suggested that some would remain temporarily in Syria to protect oil fields from Islamic State, despite President Trump’s call for a full withdrawal.